You Can Count on Me 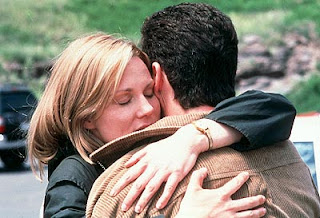 Well, you are in for a treat. We have saved the best for last. You Can Count on Me is a real gem of a movie that I fear very few people have seen, or even heard about. It is my favorite American movie since 2000 and one that I find myself compulsively re-watching every time the credits end. Why do I love it so? Let me count the ways:

You Can Count on Me tells the story of a brief reunion between a woman, Samantha (Sammy) and her brother Terry. They are very close but live far apart, leading very different lives. They share a tragic bond, the auto accident death of their parents when they were children. One of the things I love about the movie is how compact and efficient it is at conveying information. It is very much like a poem actually. This tragic event along with the film’s main themes is conveyed in three quick and concise scenes. The parents are driving at night. The wife asks why teenage girls always get braces at the worst emotional time in their lives. In a flash, there is a head-on collision. A police officer tries to tell the children’s babysitter, but finds no words. The young Sammy and Terry sit together at the funeral. No wasted exposition. No wasted words. The whole movie is like that.

I love how Sammy and Terry (engagingly played by Laura Linney and Mark Ruffalo) feel like sister and brother. They have that same wavelength, completing each other’s thoughts quality. When Terry asks Sammy if she’d like to smoke some pot, she replies, “Come on Terry, No! … Why? Do you have some?” Cut to them standing on the porch sharing a joint and looking like they’ve shared a great many others over the years.

Their characters are actually drawn in a way that makes them kind of fold over on each other. Inside Sammy is clearly Terry, inside Terry is Sammy. At the outset, Sammy is the light and Terry is the dark. The beauty in how the movie plays out is in flipping this first impression around and showing how each is both the light and dark for the other. Both could speak the line “you can count on me” to the other and it would be entirely truthful. (Fortunately, the movie is much too smart, much too subtle to be so literal.) This is the kind of subtle film where the character arc is drawn by spacing out four scenes of sister and brother. Terry sheds tears for the first two while Sammy fights back the tears in the first and is the comforter in the second. Both laugh at Sammy’s confessions in the third. In the last of these scenes, Sammy is in tears and Terry is the comforter.

I love how the movie captures rural town life. Wayward Terry returns home after a long absence filled with jail time and getting his girl friend pregnant and simply wants to sneak in, get some money from Sammy, and disappear. To his disappointment, he can’t even walk one city block without being stopped by two passers-by who wish to catch up on old times. While driving to work, Sammy drowns out her “same old same old” feelings by cranking up the radio. And Terry can’t treat his nephew, played charmingly by Rory Culkin, to a clandestine game of pool at a tavern without getting caught red-handed. (They sure have a lot of fun though.)

I love seeing Matthew Broderick in a role that is a bit different for him. (Actually, I have mixed feelings about Broderick in the movie.) Here, he plays Sammy’s bank manager boss Brian and he is, in Sammy’s own words, “the worst boss they’ve ever had.” He is like the boss from Office Space multiplied by every boss who ever didn’t give a hoot about his employees having lives outside of the office. Unfortunately, he never escapes remembrances of Ferris Bueller as if Brian is a vision of Ferris all grown up and turned cynical. This Ferris syndrome then circles around and saves the day when Sammy and Brian develop a relationship. I only believed that Sammy would see something in the pathetic Brian because he does have a dose of Ferris Bueller and who wouldn’t feel an attraction?

I love the portrayal of Sammy’s church’s pastor in a wonderfully understated performance by the movie’s writer/director Kenneth Lonergan. In a way, his character stands in for what I like most about the movie. He never says one more word than necessary and says nothing if that’s what’ll get the job done. He meets with Sammy and Terry and delivers a long speech that sees right through Terry’s exterior to his very soul. In a later scene with Sammy, he lets her do all the talking with only brief replies and nods of the head like a master counselor. And I love how, no matter what his approach, he just sits calmly in a chair with perfect posture and hands neatly folded in his lap.

Finally, I love Lonergan’s choice of the music of Steve Earle throughout the movie in association with Terry. Earle, a real-life self-obsessed outlaw, crafted country tunes that feel as if they were written with Terry in mind. (More likely, of course, Terry was written with Earle’s songs in mind although I have no evidence.) It is the final music cue with Terry riding on a bus to the strains of “Pilgrim” that has me pressing play and starting the movie all over again. I love that song. I love this movie.
Posted by Todd Ford at 7:59 AM