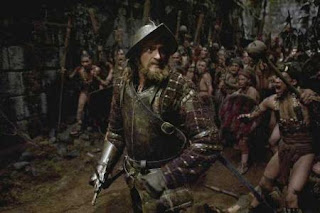 Rarely does a movie come along that captures my imagination and instantly vaults into my list of all-time favorites. It has happened twice recently with Spielberg’s A.I. Artificial Intelligence and Kim’s Spring, Summer, Fall, Winter … and Spring – both sent my mind spinning. It happened again in 2006 with The Fountain.

Directed by Darren Aronofsky (Pi, Requiem for a Dream), The Fountain tells three different stories involving the same characters in three widely different time periods. There is an ancient story of Spanish Conquistador Tomas (Hugh Jackman), Queen Isabel (Rachel Weisz), a Grand Inquisitor, and the discovery of the Tree of Life hidden amidst some Mayan pyramids. There is a contemporary story of Dr. Tom (Jackman) and Izzy (Weisz) with her dying from a brain tumor and his frantically performing experiments on lab monkeys trying to find a cure. Finally, there is Tom (Jackman) flying through space toward a dying star in a bubble containing a large tree.

Now that’s a lot of stuff for a 96 minute movie to juggle, but Aronofsky pulls it off. In terms of plot, there has been little disagreement as to what is going on. In the contemporary story, Izzy is writing a book – her poetic thoughts on what she and Tom are going through – and the film’s editing makes it very clear that the ancient scenes are what Tom imagines as he reads her book, the book being an allegory with the Grand Inquisitor’s actions and his covering a map with blood representing Izzy’s cancer and the Conquistador Tomas’ attempt to kill the Grand Inquisitor representing Tom’s effort to conquer the cancer. (Izzy refers to Tom as her conquistador.)

There has been some disagreement as to which of the other two time periods is the present. Some feel that the contemporary stuff is the present and that the space stuff is all in Tom’s mind as he attempts to write the final chapter of her book. Others consider the space stuff to be the present and the contemporary stuff being Tom’s memories seen in flashback. I think that the editing and cinematography better support this second take, not to mention Aronofsky’s own statements in its favor. Either reading is entirely supportable though and leads to its own uniquely gratifying way of seeing the film.

The film delves deeper than mere plot though – which is where most movies stop. Aronofsky has been very interested in religion – especially the Jewish mysticism of the Kabbalah – and with the ideas of Carl Jung. The Fountain consists of four parts: the ancient, the contemporary, the future, and spaceman Tom’s final separation to a vantage point outside of it all. The Kabbalah is usually depicted graphically by the Tree of Life with the lower part of the tree being man’s lower, animal nature; the middle part his human/mental nature; and the top his spiritual nature. However, man is truly the Seer who is outside of the Tree and looking at it. Jung considered our lives to contain four stages: infancy/youth, young adult, middle age, and old age/death. These are different names for the same ideas.

During the ancient scenes which correspond to the lower level, all Tomas thought would work was brute animalistic force. He wanted to kill the Priest and he was fighting with his men and ultimately against the Mayans – and that part was interesting. It symbolized his courage to defeat his lower emotions, because once the Mayans saw he was prepared to battle them, they let him pass.

The contemporary story has him trying to use human intellect and reasoning to reach his goal. But he must be guided by the spiritual and not follow the lower animal. We see him following his animal nature many times, even one time peering through an x-ray of a monkey skull with it matching the outline of his own face. We also see his turning toward the divine for inspiration when he looks up through a skylight.

The top level is the spiritual level. In space he was meditating, doing Tai Chi, and otherwise preparing spiritually to finally "finish it" and reach Nirvana/Heaven/Peace (the film gives us freedom to use whichever term we desire). When Tom has his revelation late in the film, he is able to stop nourishing himself from the base of the tree and can effortlessly climb high in its branches. He then flies away, able to look upon the complete picture.

In Jung’s work, especially involving alchemy, certain shapes are associated with these different levels or stages. Circles are symbolic of the highest stage. Squares and triangles – which are really just primitive circles, a circle being an infinite sided shape – are symbolic of less finished stages. There is a lot of interplay between these shapes in The Fountain. Triangles abound in the ancient scenes. The contemporary scenes are designed around squares and rectangles. The spaceship is a great circle. When Tom is overcome by his emotions, he turns to performing surgery on monkeys illuminated by a triangular pattern of lights that echoes the pattern on the dagger/map in the ancient story. Tom gets divine inspiration by looking up through a rectangular skylight to circular swirling clouds.

Jung called the process of finishing oneself, of becoming complete, Individuation. A very important aspect of Individuation is a mutual development of both our male and female aspects. Jung saw the Hindu God Shiva – often depicted as half man and half woman – and Jesus – sometimes depicted in androgynous terms as the returning Adam to restore the separation of the sexes begun with Eve – as perfect examples of Individuation. In Kabbalah, moving up the Tree of Life involves an intertwining of the male and the female. There is a wonderful illustration of this in The Fountain when Izzy desperately pulls Tom into the bathtub with her. (Some ancient illustrations of the Androgynous Man show an intertwining of man and woman above a circle encasing a square encasing a triangle.) What Tom lacks to be finished is a developed female aspect of his psyche and Izzy knows this. He is all aggression and driven by the need to control and to conquer. Izzy – his Eve – is helping him to finish himself.

Ultimately, all of this really boils down to a pivotal moment in Tom’s and Izzy’s lives. Will he go for a comforting walk with Izzy during her final days, or will he continue to be the conquistador. Will he become finished in the sense of being male and female? Or will he remain unfinished?
Posted by Todd Ford at 5:29 PM

We have the ability to complete our soul's mission at any given moment by making a corrective decision/action. This fulfilment of one's tikkun transcends time and all of our previous lifetimes are realigned and unified allowing for our soul to ascend. Our animal soul/evil inclination exists to give us the opportunity to act out in creation but ultimately it seeks transformation into a higher plane through our soul evolution. Even when we reach a perceived state of completion there is still temptation at the highest level that needs to be overcome and transformed - the ultimate test. Yet, there is still another opportunity to transform and complete even in the soul plane, and reach unity with the Divine. All of this is contained in this film...brilliant.