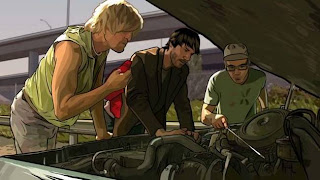 "Making the wearer of the scramble suit the ultimate everyman. He looks like a constantly shifting vague blur … Let's hear it for the vague blur." Laughs and applause erupt in a room full of businessmen.

This dialog occurs in an early scene from the fantastic and fascinating film A Scanner Darkly written and directed by Richard Linklater. Our protagonist, Bob, an everyman even by name, is addressing a room of generic businessmen, a twisted satire of a Lions Club luncheon. And as early scenes typically do in movies, the theme of the film is established. We are watching a film about the “faceless establishment,” “big business,” or whatever else you wish to call it versus the “people.” Bob goes on to worry about how Substance-D (more on this in a moment) is hooking our kids at a young age and to express the urgent need to rid the country of its dependency on this drug. His voice trails off to a mutter as the businessmen grow restless, their financial motivations for the continued success of Substance-D quite clear. He takes his seat and the moderator retorts, “Let’s eat.”

A Scanner Darkly is a science fiction film about a drug-addicted public of the near future based on a novel by Philip K. Dick who also brought us Blade Runner. It stars Keanu Reeves as an undercover agent, Bob, assigned to gather information about himself. (Agents wear scramble suits that hide their identities even from their superiors making this strange situation possible.) Bob shares the screen with an assortment of companions played with loopy druggie logic and behavior by Woody Harrelson, Robert Downey, Jr., Winona Ryder, and Linklater regular Rory Cochrane and, as in all of Linklater’s dialog driven, often conspiracy theory fueled films, the verbal interactions between these characters are at dazzling center stage.

What a viewer will find most immediately striking about the film is its visual style. Like Linklater’s earlier film Waking Life, a technique called rotoscoping has been used throughout the film. This technique involves shooting real actors and then creatively tracing, drawing, and otherwise animating over the top of that reference footage to create a realistic yet oddly detached and dreamlike impression. Both Waking Life – about dreams – and Scanner – about characters losing grasp with reality – benefit strongly from this approach.

Back to that drug Substance-D. It is, both for the radical 60s writer Dick and for the like-minded Linklater, a metaphor for how people are subtly made dependent on the proper consumer lifestyle by “the establishment” – recall Bob’s concern about kid’s getting hooked at a young age and notice how in today’s world advertising makes it essential that kids keep up with the latest Nintendo, etc. Slacker, Linklater’s breakthrough film, depicts do-nothing Austin, TX denizens leading a laid-back resistance to America’s addiction to consumerism. The relationship of this to drug addiction is interesting. How many times have you heard that, no matter how rich you get, you never have enough? Any amount of wealth and possessions merely breeds a need to have more. And no dosage brings the same level of pleasure for long. Something -- higher taxes, higher cost of living, or the latest expensive stuff you must have to stay "happy" -- always comes along to make a level of income less satisfying this year than last.

Linklater’s Dazed and Confused is about the final day of school for some high school kids and how they blow off steam that night. What that film methodically depicts is a process of molding and shaping boys and girls to become men and women who fit acceptably into society and the ugly results of this process if it goes awry (or goes too perfectly?). Because of this, Dazed has been referred to as a horror film with a hero who resists doing what is expected and, like Scanner’s Bob, goes cold turkey by refusing to sign away his life to tradition. This makes Scanner a remake of sorts of Dazed with the making of good, proper little Americans by “the man” represented by drug addiction and high school hazing respectively.

Sadly, as is expressed in Scanner – “the world is getting worse” – things have gotten bleaker in Linklater’s outlook. In Dazed, the hero escapes and hits the road to buy Aerosmith tickets. In Scanner, Bob, now on a rehab work farm, plucks a blue flower, the source of Substance-D, and quickly tucks it into his pocket.
Posted by Todd Ford at 5:32 PM