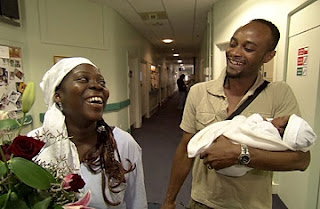 Oh, where do I begin with Michael Moore? I have so many thoughts up and down and all around concerning him and the films that bear his name. I’ll just say off the top that I consider him one of my favorite filmmakers and perhaps one of the most important now working.

He would be the most important without a doubt except for one problem: He has an irresistible drive it seems to aim a gun at his toes and pull the trigger. He gave his attackers an easy opening by fiddling with timelines in Roger & Me. Taking cheap shots at a decrepit Charlton Heston and giving the last (albeit shrewd) word to Marilyn Manson in Bowling for Columbine probably wasn’t a good strategy. He should have known that attacking George W. Bush so viciously during an election year in Fahrenheit 9/11 would leave no room for even a single error. (He made far more than one.)

I’ve come to anticipate each new film with a cringe of anxiety and with SiCKO he is at it again. Brick by brick, he develops his case like a college student writing an essay assignment in persuasion – to persuade us to feel despairingly about the state of health care in the United States. And it worked. My wife and I left the theater ready to up and move to Canada.

But on reflection, why did he choose to open the film by stabbing the now defenseless George W. Bush? Sure, his line about gynecologists needing a chance to show more love to their patients is a classic Bush-ism, but it really didn’t have a function in the film other than to start fanning the flames in the first five seconds. It certainly doesn’t support the film’s overall position that health care is an apolitical issue.

It doesn’t take much thought to become highly unconvinced by his “typical” middle class Americans living in France or his “typical” British doctor’s lifestyle. Yes, in the moment, they make very compelling cases for things being much better in other countries than the evil and broken socialism we are warned about in a propaganda film featuring Ronald Reagan. But, come on now Michael Moore, we all know the only thing “typical” about these examples is that they support your argument.

Finally, why did he have to blow off a few little piggies in the final section by dragging a bunch of 9/11 rescue workers to Cuba to show them getting better medical care than they’ve managed here at home? Sure, the whole escapade is vintage Michael Moore theatrics, but it brings the film to a conclusion that evokes the very communist fears he’s so far spent the whole film side-stepping.

(I thought he was about to blast away at another toe by bringing Hillary Clinton into the picture. I thought, “Oh great. Last time he tried to get George W. Bush out of office. This time he’s going to try to get Hillary elected. Then he threw a curveball by incriminating the Democratic candidate for taking a fat kickback from the big health insurance corporations.)

So, why do I like Michael Moore, let alone find him so important, so valuable? For one thing, his films are very entertaining – entertaining in ways and to a degree that people never thought documentaries could (or should) be. Now, I’m sure I find them especially entertaining – while the whole “Fox News set” considers them like multiple paper cuts beneath their fingernails – because I agree with Michael Moore, maybe not in all the little details, but certainly in the big picture. I feel much disgust for large corporations and fat hog corporate executives. I am for very strong gun control laws. I know in my heart that the nation went on the critical condition list the day George W. Bush stole the White House.

That’s all very subjective though and says as much about me as anything. It demonstrates that I’m a rather radical Democrat. Woo Hoo! Where I find the most value in Moore’s cinema though is in its basic, fundamental, constitutional expression of free speech. I see Michael Moore as a ranter (MS Word’s squiggly line tells me I just coined that term) who has found a very vocal, highly visible vehicle for his rants – certainly more visible than even the highest profile blog and right up there with nationally syndicated columns and the Rush Limbaugh radio show. He gets all worked up about something and shares that passion with the world. And just like Internet bloggers, getting the facts straight or being fair and unbiased isn’t a top priority. Getting people’s attention and getting their tongues wagging is what counts.

Michael Moore is one of our most important filmmakers because he forces issues that are burning a hole through his heart out in the general consciousness where real discussion can begin. And he goes after issues that I feel should be burning holes through all of our hearts. Maybe someday he’ll put it all together and make a film that is as bulletproof in its arguments and fact-checking as it is hilarious and crafty – and effective at raising temperatures. But would that really make it a better film? Is it even possible in this bi-partisan country to pull both sides together on these issues? Or is flame fanning really our best compromise?
Posted by Todd Ford at 6:45 AM

As much as each Michael Moore movie makes us cringe, we can't help but be blown away by seeing what's behind closed doors. Sicko puts a huge issue Americans are facing everyday. Unlike his other movies, we can't just ignore it and turn the other way. Farenheit 911, if you're a Bush lover than the movie is trash. However, healthcare impacts everyone-taxpayers, the elderly, babyboomers who may one day neeed assistance, low income families and so on. AARP has come up with a site http://www.thisissoridiculous.com . It was set up so we can get our voices heard on this important issue by signing a petition and contacting our congressman. I am working to support AARP on getting all of our voices heard, we need to take a stand before it's too late.

...please where can I buy a unicorn?