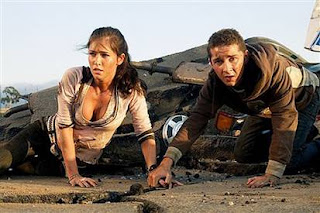 Have you ever wondered what would’ve happened if Edward D. Wood Jr. had attempted a Godzilla movie? Until last night, the thought had honestly never crossed my mind. That all changed though while watching Michael Bay’s Transformers. As ineptly directed as humanly possible, it is also, I fear, destined like Plan 9 from Outer Space and Godzilla versus Space Godzilla to stumble its way into my pantheon of very guilty pleasures.

The “plot” involves a giant cube crashing to Earth and a bunch of non-biological aliens waging battle over some broken eye glasses left in the Arctic Circle by an adventurous scientist who happens to have been the grandfather of Shia LaBeouf. Shia is a rather un-nerdly nerd with nothing on his mind except mentally undressing the girl of his dreams who looks an awful lot like a Playboy playmate of the year. It also has a lot of actors standing around reading dialog like they’ve never seen it before and like they hope to never see it again. It even has Jon Voight and John Turturro popping up here and there apparently tricked into thinking this is a Spielberg movie by the opening image of a boy fishing from the moon. (I’d love to have seen their faces when they discovered the truth.)

We also get to watch a lot of cars race around and often transform themselves into really cool robots that fight with each other and smash other cars and houses and backyard water fountains. The good ones even protect Shia LaBeouf as if they’ve taken lessons from The Iron Giant. I chose the word “cool” because these scenes really are technically quite smashing and really did bring out my inner little boy. I found myself wondering if Michael Bay might be a pretty darn cool director if he made films without, you know, any human characters.

Transformers is the type of movie that I was ready to abandon after about ten embarrassing minutes of opening exposition. At that point, my teenage daughter who had already squirmed her way through it asked me what I thought. I gave her thumbs down and she chuckled telling me it only gets worse. I’m here to report that she was wrong, sort of.

Sure, every time a scene is slammed down in front of us with a bunch of people standing around talking without any cool robots in sight, Transformers becomes a truly dull boy. Fortunately, there are enough scenes with cool robots to allow the movie to build something close to an entertaining sense of forward momentum, even if it is of the three steps forward, two steps back variety. It also has a few aspects that I actually enjoyed.

At the center of this storm of half-baked ideas is a boy-and-his-first-car-coming-of-age-story, the boy being Shia LaBeouf. Now, of course this storyline has been penned with all the finesse of a 10-year-old boy with a box of permanent markers and Bay has once again demonstrated his history as a Playboy video director with his presentation of the love interest played by Megan Fox. (The pretty surfaces and ultimate emptiness of this boy wants girl, boy gets girl scenario is betrayed by the “big kiss” moment at the end which feels totally perfunctory and is allowed seemingly a split second of screen time amongst the hubbub.) All the same though, there is something indestructible about a boy getting his dream girl with the help of a cool car, not even Bay could completely mess it up. And when the car is this cool – the coolest movie car since Christine though of course not as benevolent – how can the boy in me not cheer?

Transformers doesn’t take itself too seriously, always a saving grace in a big bloated Summer blockbuster. There is a tiny evil robot that constantly flits about like a little spider, constantly verbalizing (all the robots talk in some sense) with little “oops” and “uh ohs.” It also gets in a bit of slapstick including a scene where it sneaks across an airport runway. The good robots get their time for slapstick fun as well by spying on and hiding from Shia LaBeouf’s parents outside their house – and totally making a mess of his father’s beloved backyard. One of the robots even gets peed on by LaBeouf’s dog and proves he learned his lesson by later peeing on the unlikable (here) John Turturro. (Okay, maybe that last bit was taking things a bit too un-seriously.)

Finally, the whole film is really, as I alluded, designed as a giant monster movie in the grand old Godzilla tradition and it is fun in this sense. We get introduced to the good monsters and the bad monsters. We get just enough – mostly very silly – background mythology to explain their existence. Then they are set loose to bash each other all over the screen. And for most of the time it is fun to watch, although, as has been my experience with most giant monster movies of the Japanese variety, the climactic battle is more drawn out and busy than exciting. In Transformers, I actually started to nod off during what should have been the most riveting battle in the movie.

interesting review. As a 30 year old dad of 3 kids, the 8 year old and 5 year old suggested we watch it again and again in theatres. This movie was based on toys that i watched in cartoons and played with as a child and has be "reformulated" to today's generation of kids. Its like how Star Wars of 1977 (the year i was born) and Star Wars of 1999 (the year my first son was born). The newer movie can never live to the hype of the original.

Now that Transformer the movie is out on DVD. I return home to Transformers.... on TV. I say, thank god for Megan Fox because right now i can't stand another minute of it, but my kids love it