This Film is Not Yet Rated

It’s funny how things work out sometimes. Weird little unplanned synchronicities pop up; giving the impression that Cinema 100 had a master plan while we really aren’t quite that clever. Such a thing happened recently with “This Film is Not Yet Rated.”

The documentary uses interviews and a fun bit of sleuthing to uncover secrets about the inner workings of the Motion Picture Association of America (MPAA) and how they assign movies their ratings – G, PG, PG-13, R, and NC-17.

The first of many filmmakers interviewed is Kimberly Peirce who had a frustrating run-in with the MPAA over her dazzling and daring first feature “Boys Don’t Cry.” She tells a fascinating tale of how her movie got slapped with a dreaded NC-17. Dreaded because it greatly hampers the ability to market and distribute the movie. Some media won’t run advertisements and some theater chains won’t play it.

While planning the current series, we invited “The Group that Opened the Box,” a local organization of teenage girls, to pick a movie. They were our 2009 filmmaker grant recipients for a documentary project of their own. They quickly chose “Boys Don’t Cry.”

Now, we get to sit back and look brilliant. Our third movie enticingly advertises our third to last movie.

“This Film is Not Yet Rated” is a perfect concoction of the three things I always hope to find in a documentary – it is educational, it is entertaining and funny, and it is maddening and makes you want to go out and change things.

I’m a movie guy and yet I’ve never really paid much attention to those silly letters at the bottom of movie posters telling me if I should bring my two daughters along or hire a babysitter. I’ve always preferred to do things like read reviews and otherwise educate myself about a movie. Now, I’m really glad I never left such movie going decisions to the MPAA.

They consist of a cabal of “typical parents” (whatever that means) with all sorts of vague and undisclosed ties to church and state. Basically, if you want to put some sex or violence into your movie, you can – as long as you have enough money to pay off the lobbyists.

Most Americans probably think there is some law stating that kids aren’t allowed to see R-rated movies without a parent. No such case. Ratings are simply an industry’s attempt at self-censorship and is all directed by money, power, and politics -- and without much internal consistency. It is all based on political whim with, for instance, gay-themed movies receiving a crippling NC-17 rating for the same content that non-gay-themed movies get away with.

And in his shrewdest move, director Kirby Dick hired a private investigator to try to learn the top secret names of the board members. It turns “This Film” into one of the funniest spoofs of the detective genre I’ve ever seen.

“This Film is Not Yet Rated” is unrated. Its MPAA rating was surrendered; the version submitted was rated NC-17 for some graphic sexual content. What we have now is pretty frank about sexuality and violence and the MPAA’s attitudes toward each. It is more comical than graphic though.

The movie shows at the Grand Theatres on Thursday, February 4 at 3:00 and 5:30 as part of the Cinema 100 Film Society series. Tickets are available at the door.
Posted by Todd Ford at 10:04 AM No comments:

There’s a delicate little scene between mother and daughter early in “Treeless Mountain.” A young girl, maybe six, wakes up in the night. She’s wet the bed. Her mom comforts her and bathes her. The girl sobs throughout and a glob of snot drips from her nose. Without missing a beat, the mother reaches up and has the girl blow her nose onto her hand. Then she rinses it off in the bathwater and starts to dry her daughter with a towel.

That scene is typical of the quiet and gentle nature of this masterful little movie set in contemporary South Korea. The girl, Jin, and her younger sister Bin are generally a happy pair. Unlike my kids, very unlike my kids, they enjoy their school days so much that they can’t wait for Monday to roll around again. But, they live alone with their mom and there is an air of insecurity about their existence. The bed-wetting is only one of several clues.

This situation is short-lived. The mother feels she can’t provide for two small girls on her own and sets out to find the girls’ father. She leaves the girls in a small town with their aunt, their father’s sister, a woman they’ve never met and who isn’t much glad they are meeting her now. The mother gives the girls a piggy bank and says, “When this is full, I will return.”

Jin and Bin now find themselves fishes out of water in a strange town very different from their home city of Seoul. All the rules have changed and they’re going to have to learn the new ways in order to survive long enough to fill that piggy’s fat belly. Their aunt, a drunk with little time for a six and a three-year-old, has her own rules like “eat what I give you or starve.” The townsfolk have their own rules as well, not to mention wondering why these two girls don’t go to school.

The most important rules that Jin and Bin must master though are those of the local kids. “Treeless Mountain” has a classical, mythological, quality of kids forming a secret society as they try to figure out what makes grown-ups tick. It isn’t a stretch to compare it to such classics as “To Kill a Mockingbird” and the great French film “Forbidden Games” where two small children come to grips with WWII by creating a secret cemetery for all the small creatures that have lost their lives.

The centerpiece of “Treeless Mountain” involves grasshoppers, the tastiness of roasted grasshoppers, and the market value of such tasty treats. These scenes, often rendered in extreme close-ups that bind the children intimately with nature, are absolutely magical. They also left me kind of curious as to just what a roasted grasshopper tastes like.

Whether or not Jin and Bin manage to fill that piggy’s belly and what becomes of their mother are things I’ll leave for you to discover. I did find the ending to be just as delicately observed and fitting as that early scene of a mother bathing her daughter. It left me with the feeling that things will turn out just fine for the girls, eventually.

“Treeless Mountain” has not been rated by the MPAA. It is well suited though for viewers of all ages and will be enjoyed by anyone who is charmed by resourceful children trying to make sense of the mysterious world of adults.

The movie shows at the Grand Theatres on Thursday, January 28 at 3:00 and 5:30 as part of the Cinema 100 Film Society series. Tickets are available at the door.
Posted by Todd Ford at 9:44 AM No comments:

Anvil! The Story of Anvil 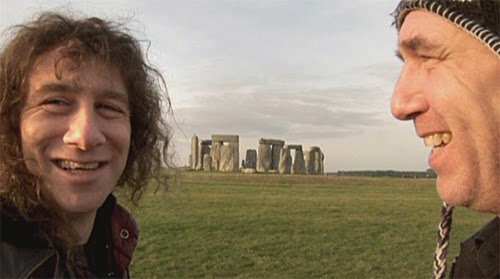 I wonder how many people in the world have dreams, but, out of fear, give them up before even trying to make them come true. I’d say many millions. How many give them a shot, but give up once harsh reality starts keeping them awake at night? I’d say just as many.

Now, how many follow their dreams even when the going gets tough? And when their friends and family advise them to hang it up, they still persist. Man, they keep charging ahead even as the tiniest fire of pessimism simmering deep inside their optimistic guts begins to rage. Well, one such man goes by the name Lips.

“Anvil! The Story of Anvil” tells the story of Steve ‘Lips’ Kudlow, guitarist and lead singer of the heavy metal band Anvil. Since his teens, he’s shared a dream with his buddy, drummer Robb Reiner, of becoming a rock star. They formed a band and started gigging in their hometown of Toronto and enjoyed a bit of early luck. They were on the bleeding edge of the early ‘80s heavy metal rage.

For slightly more than fifteen minutes, they were poised for the big time alongside the big four – Megadeth, Slayer, Metallica, and Anthrax. Then, somehow, as those bands advanced to filling arenas and selling millions of albums, Anvil receded into empty bars and albums only purchased by a few diehard fans. What happened?

Oh, the movie suggests some possible answers. Their songs really aren’t all that good. They have lousy management. They’re unwilling to compromise and change their sound to fit the ever fickle changing times. Or, simply, life just isn’t fair.

That’s not really what the movie is about though. What it is about is a guy and his passion? It’s about his getting by day after day, year after year, feeding his family without giving up on his dream. It is a funny, sad, heartbreaking, until finally jubilant movie. I found every moment moving and charmingly real. I fell in love with Lips.

“Spinal Tap” is my favorite mock-documentary. It is so truthful to its subject that I forget it is a fiction. “Anvil!” is also one of my favorite movies. I felt for Lips so strongly that I often wished it was a fiction. I kept hoping that the filmmaker would suddenly jump before the camera and wink and then Lips would say, “Ha, got you going.”

I couldn’t believe my eyes when Anvil is recording an album in the English countryside and their producer casually reaches over and turns the amplifier up to eleven. Anyone who doesn’t notice the weird synchronicity of that moment not only needs to see “Anvil,” but also seriously needs to rent “Spinal Tap.” Its “but this one goes to eleven” scene is one of the funniest in movie history.

“Anvil! The Story of Anvil” has not been rated by the MPAA. It does contain brief nudity and quite a bit of profanity of the two bests friends having a lover’s spat variety. Think Mick Jagger cussing out Keith Richards and you’re on the right track.