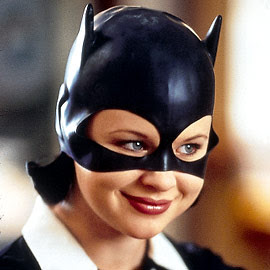 “A relationship, I think, is like a shark. You know? It has to constantly move forward or it dies. And I think what we got on our hands is a dead shark.” Those immortal words were once spoken by Alvy Singer in the movie Annie Hall. Then again, he could’ve just as easily been speaking about the movie Ghost World, an infinitely re-watchable little oddity directed by Terry Zwigoff (Crumb) based on a graphic novel by Daniel Clowes.

Ghost World tells the story of Enid and Rebecca as they move on with life post high school. They were the outsiders in school – well, mostly Enid – and they were and still are best friends. They are all attitude, mocking everyone and everything around them. Faced with impinging adulthood, Rebecca realizes time has come to move on, to grow. She realizes that adult life is a game with a new set of rules. She dresses up as a “yuppie” to try to get accepted into a nice apartment building. She ignores customer rudeness at her coffee shop job (while secretly feeling “like poisoning everyone”).

Enid resists change at every turn. When Rebecca asks her to play the yuppie role to help out with their apartment hunt, she instead dyes her hair green and evokes the most anti-social role she can muster up – the “original 1970s punk rocker.” Enid has a relationship with a lonely and pathetic soul named Seymour and makes it her mission in life to get him a date. But, once she succeeds in getting him into a relationship and sees him starting to change as a result, she can’t deal with it. Enid is, of course, the dead shark of this analogy. Seymour is in danger of sinking to the ocean floor along with her.

Okay, that’s what Ghost World is about when you get right down to it, but what I really want to write about is how well it brings its characters to life. Now, the supporting cast is about the most cantankerous collection of colligenous stereotypes you’ll ever encounter (possibly why the movie failed to sway Academy voters) but its three leads are solid gold.

Enid and Rebecca are played by Thora Birch (American Beauty) and Scarlett Johansson (Lost in Translation) and one is immediately convinced that these two have shared the same friendship space since childhood. They are in perfect sync, one’s actions feeding the other’s reactions as if they are connected through extra-sensory-perception. There is a delightful moment where they both react to an encounter with an annoying former classmate with the same hand gesture. There are many other such moments as well. And watching these two become un-synchronized during the movie is one of its greatest pleasures.

Steve Buscemi, America’s greatest character actor (you heard it here), plays Seymour. Or rather, he is Seymour. If you’ve seen Reservoir Dogs, be prepared to be amazed that it’s gun-toting, tough-talking, and very loud Mr. Pink was played by the same actor as this mild, slightly high-strung, collector of old 78s who shuts off a car radio because the DJ is too hateful and shrill. It is an amazing and detailed transformation.

I also must admit that I really know Seymour. (I think that is the highest compliment one can pay a movie. To really feel you know it’s characters.) He has passions shared by few others, passions that wouldn’t exactly ensure his being selected on The Dating Game. He knows he doesn’t relate to, as he puts it, “99% humanity.” But he keeps on keeping on anyway, staying true to himself. I have my idiosyncrasies and my interests that few people share – anyone up for spending an evening watching hand-painted Stan Brakhage films with me? And I don’t relate to 97% of humanity (okay, I’m not quite as much a loser as Seymour). I also consider myself very lucky to have found my wife and that she still puts up with me after all these years. (Ironically, we met via a personal ad. Please, please will the similarities never end?)

Now that I think about it, there may be another reason Ghost World didn’t do so well with Academy members. It has an ending that is truly and genuinely strange. It is something of a head scratcher, open to interpretation, always a risk since winning awards means getting a lot of people to hop into the same boat. I have my own rather sad interpretation that I won’t reveal here to avoid spoiling things. I’d be curious to hear your interpretations.
Posted by Todd Ford at 11:47 AM

I like reading your website for the reason that you can constantly bring us fresh and cool things, I feel that I should at least say a thank you for your hard work.