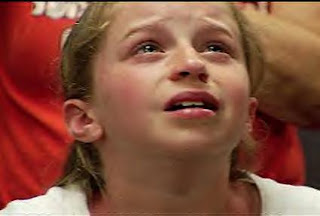 God works in mysterious ways – and so does the Devil. Filmmakers Heidi Ewing and Rachel Grady also had to work cleverly when they made the documentary Jesus Camp, perhaps the years best horror film. They had to act as devil’s advocates – ironically in this case – and work their way into the confidences of Becky Fischer and her ministerial team. They couldn’t risk Michael Moore tactics. They had to burrow carefully and silently like moles into the midst of the “Kids on Fire” summer camp and let their subjects do the rest.

Fischer says at one point, “The devil uses tactics to destroy our lives.” In a pivotal scene, a guest pastor at the camp takes 12-year-old Levi on stage and narrates to him God’s storybook of his life, cupping his hand as if holding a book. But the devil giggles at the subconscious details. The pastor scribbles the story with his finger as he tells it. He isn’t reading Levi God’s story of his life. He is re-writing God’s story to fit the camp’s goals.

Jesus Camp spends a lot of time reminding us that kids are kids. They like to scare each other in the dark with ghost stories. They hate it if their bacon gets in their syrup. They enjoy Harry Potter even if it requires sneaking a peak now and then. They like to swing on swings and they like to throw rocks.

Jesus Camp quickly settles in to focus on three kids all wonderfully cast for their effortless appeal. They’re cute and vivacious. Their potential is evident in every frame of celluloid, making the tragedy of their stolen potential all the more poignant and distressing.

We have Rachael, age 9, a chatterbox of a natural charmer. The type of kid who could walk up to a stranger’s door and sell her 25 boxes of Girl Scout cookies without batting an eye. All of her talents though have been channeled into walking up to provocatively dressed women in bowling alleys and elderly men in parks attempting to save them. She dreams of being a manicurist so she can have an endless supply of captive listeners as she spreads the good news. She shrugs off other kids who say she’s weird. One day they’ll be sorry she says.

We meet Tory, age 10, while doing what gives her the most pleasure, dancing to heavy metal Christian rock. She is another cute chatterbox who displays a dancer’s grace in every move from answering her mother’s questions with a flip of her arm and toss of her hair to fastening her suitcase and eating breakfast with musical fluidity. She also chastises herself, filled with self-disgust over her awareness that she sometimes dances for “reasons of the flesh.” She is so ashamed of something so natural for a girl of 10 that I had to look twice to see if her mother is Margaret White from Carrie. Tory is later reduced to a tear-streaming mess as she is admonished at camp to repent for these “sins.”

The common denominator with all three kids is they have been molded into little soldiers spreading the word of Christ, and have been made so at the cost of their individuality. People are born to serve God in infinitely many ways. I know a family of siblings who glorify God every day with their singing voices. Akeelah in Akeelah and the Bee refracted God’s light through her prowess in spelling bees. I know a teenager who excels in swimming. She once told me, “When God created me, he wrote ‘swimmer’ on my forehead.”

Much of the imagery used by the “Kids on Fire” camp reminds one of the military. And it really is a basic training experience – brainwashing, I say, as evidenced by the rhythmic and hypnotic chanting and drumming that accompanies chastising the kids for their sinful, “hypocritical” lives – and is steeped in the military ideal of Us versus Them. It is Us versus Islam. It is Us versus non-believers. And, as Rachael says, it is Us versus the “dead churches” that just sing a few songs and quietly listen to a sermon.

What pop out the other end of this grinder is not God-made individuals, each with his or her unique role to play, but rather a battalion of like-minded children ready to goosestep their way back into the world. Becky Fischer tells the campers, “Do not let Satan get you off the path God has chosen for you.” I’m sure Satan would be most happy to shake her hand and offer thanks for the help
Posted by Todd Ford at 5:27 PM