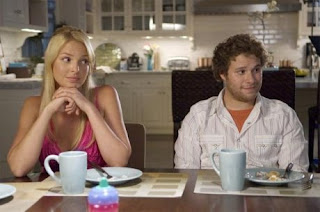 Knocked Up. Hmm, I think a better title would have been Snuck Up because this baby snuck up on me twice.

When I first heard the title, I thought, “Oh great, another stupid sex comedy about some guys spending every waking moment trying to get laid and then one of them has to deal with the nightmare of getting unlucky.” Then I noticed it was by the creator of Freaks and Geeks, a TV series I’ve loved completely ever since a friend loaned me her DVD set for a long road trip. That got me interested. (The fact that I disliked the 40-Year-Old Virgin didn’t deter my interest either.)

So, I finally got around to seeing it with my wife and was pleasantly surprised. I loved every minute of it. From start to finish, I was either smiling or laughing or nodding my head with recognition of the characters’ plight. I found it wonderfully observed. It wasn’t a stupid sex comedy about getting laid. It was a stupid sex comedy about getting laid with a heart, one that cared about and understood its characters much like the first American Pie, another film that snuck up on me.

Driving home, the film snuck up on me for the second time. My wife said, “That was a complete dick flick.” I cleaned the wax from my ears and asked her to say it again. She said, “That’s a movie only a guy could love.” I thought to myself, “That’s a new one. A film containing pregnancy tests and birthing classes and women sitting in bed eating ice cream and a child delivery scene full of details – ‘Give me an epidural now!!!’ – seemed to me chick flick city. How could this be a dick flick?”

Reading back now over what I just wrote, those are all things I know from my direct experience with the whole having babies thing. Those are all things any guy with kids should know. They are all having-a-baby clichés. Maybe I overestimated the quality of observation because I was having such a good time?

Yes, I think she was right. When I pressed her to elaborate on her dick flick feelings, she said that it’s one thing for a woman that successful and that beautiful to get really, really drunk and get knocked up with a guy like that, but once she’s sobered up and sees him for the schmuck he is she would be out of there in nothing flat. “He wasn’t even very nice to her,” she added. And I can’t really argue with this, except I thought he was a pretty nice guy. In any real world situation (yes, I know this isn’t the real world, it’s the reel world), such a woman wouldn’t give such a guy any chance of success. This film stretched the idea of looking past the outside to see the inner beauty as far past the breaking point as Shallow Hal did, maybe more so. It just ain’t credible.

I found myself forced to explore why it worked so well for me and one reason was immediately obvious. It was made for me to love. Like the guy, Ben, I’m a nerd who spends a lot of time watching movies and can even imagine myself in some alternate life living like Ben with several nerdy roommates and spending all my time building a website that keeps track of how far into movies one must skip to get to the scenes of exposed boobs and bush. I could easily have been one or two different decisions at age 20 away from living Ben’s life. The girl, Alison, is like all those unobtainable goddesses of my early twenties who’d possibly allow me a dance at a club if enough alcohol was involved, but whose phone numbers always rang at some retirement home across town or at the neighborhood Taco Bell once I got up the nerve to dial them.

The other reason Knocked Up worked for me is that it truly is, like American Pie, a cut above the usual sex comedy fare. It is filled with those unexpected turns of character that are beyond the usual reach and ambition of the genre. The husband of Alison’s sister, Pete, seemed headed straight toward villain territory before taking a series of character revealing detours – my favorites involving a game of fantasy baseball and a Vegas hotel room that has a few too many mismatched chairs. For another example that really made me smile, a nightclub bouncer pulls Alison’s irate sister, Debbie, off to the side and calms her with a speech that sneaks up on you with its sad and raunchy frankness. (Another reason to re-title it Snuck Up.)

The film is also stuffed full. (My first words to my wife after leaving the movie were, “Now that movie was a very full movie. It was stuffed to the brim with great moments.”) There is the girlfriend of one of Ben’s stoner roommates who talks just like girlfriends of many stoner friends from my younger days. (Can you buy these girls in a box with instructions to just add water?) Ben and Pete escape to Vegas where they learn the answer to the eternal question: What would Cirque du Soleil be like on psychedelic mushrooms? And in still another one of those out-of-left-field moments, we learn a compelling theory for how a bunch of guys can all suddenly be stricken with pink eye. Hint: it involves farting into each other’s pillow.

So, I was learning so many unexpected things in imaginative ways and was laughing so much at myself in some alternate version of my own life that I was completely duped. I thought I was treating my wife to an afternoon out to see a chick flick – or at least a couple’s flick – when I had really dragged her to see some new breed of dick flick, one that replaces car crashes and machine guns with movie geek talk and scenes debating when to best launch an almost porn website. Maybe it was a good thing I never glanced over to gauge her reactions. It might’ve spoiled the fun.
Posted by Todd Ford at 5:23 PM