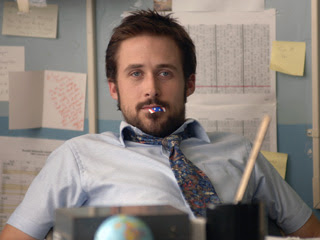 Sorry. If you were hoping that Half Nelson is the next in a long and proud line of drug addict movies from Cinema 100, you are bound to be disappointed. Not because it isn’t about a drug addict. It is. And not because it doesn’t take a very frank and detailed look at its drug addicted character in a way that makes one feel his pain. It does. (There is a scene early in Half Nelson set in a girls’ locker room that makes smoking crack seem like the most miserable of human pastimes.) The movie isn’t about drug addiction though.

Half Nelson tells the story of an inner city high school teacher, Dan, played superbly by Ryan Gosling. He is also the girls’ basketball coach and it is both in the classroom and on the court where he forms a relationship with 13-year-old Drey, played very charmingly by newcomer Shareeka Epps, one of many great finds giving the movie a real sense of real high school kids. Dan and Drey’s lives are forced together by the crack smoking scene I mentioned and their relationship is filled with struggle between his white, upper middle class upbringing and her streetwise childhood which includes firsthand knowledge of the drug world.

Dan is, you might say, addicted to conflict. The school principal comes down on him for not following the mandated textbooks. He instead teaches his students about dialectics, a theory that attempts to explain how change works. He fills his class time with discussions about who is “the Man” that is keeping us down and with demonstrations of struggles and breaking points using arm wrestling contests. One of his students describes the school as being “the Man” and then she points out that so is Dan since he works for the school. He counters that the machine is even bigger, encompassing all the students as well. It is a sad commentary in the movie that Dan’s self-styled approach places such light bulbs over his students’ heads while the government mandated curriculum will just leave them asleep at their desks.

Dan has become disillusioned by his own teachings though. In a telling scene, he picks up a woman in a bar and takes her to a motel. He laments to her about his Iraq war frustrations such as how many people still believe there are weapons of mass destruction to be found. He then asks the question, “What can I do? I’m one man. ” And then in a moment of crystal clear cinema, the film cuts to his preparing lines of cocaine, providing his answer to his own question.

While visiting his apartment, a woman friend notices the Communist Manifesto on his shelf and asks if he is a communist. Visiting her apartment later, he says before entering, “I am not now nor have I ever been a communist.” He then tries to have sex with her and she strikes him on the mouth. This struggle leaves him wearing a Band-Aid on his lower lip for the next few scenes. Not just any Band-Aid though, but one resembling an American flag. It is a comic touch that reminds me of the 60s counterculture figure Peter Fonda drifting through Easy Rider with an American flag protecting him in the form of a motorcycle helmet. It is actually closer in spirit though to the bandage Jack Nicholson wears in Chinatown after getting his nosed slashed for being “too nosey.” For Dan, this American flag doesn’t offer protection, just a reminder of his injury when his ideas came in conflict with real life.

Dan says at one point that “If you change one person, you change the…” But he cuts himself short almost embarrassed by the cliché. Later he says, “One man alone means nothing…” and then again cuts himself off with a laugh. His whole passion for the theory of dialectics (probably cribbed from Marx) is based on struggle between two opposing forces leading to a breaking point, this breaking point giving birth to a new idea. Dan has many struggles and many breaking points during Half Nelson. The most beautifully cinematic one has him driving his car past some drug dealers. We see him trying to decide if he should stop or continue. His windshield is bathed in the red light of a stop light. Then this switches to green light. At that moment, it is truly one man’s choice – he is free to keep on driving. Instead, he puts the car in reverse and returns to the drug dealers. At the end of Half Nelson, Dan is faced with a number of breaking points and we are left wondering what he will do. Has he completely given up on the power of one person? Will he make the right choice at least once?