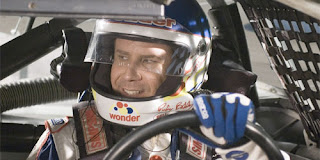 When the most memorable characters in the movie are supporting players, there is something very wrong in Talladega Nights. Something got lost in Will Ferrell’s attempt to turn Ricky Bobby into a comic legend of the speedway. As I sit and write this, all that sticks in my mind is a guy running around in his underwear believing he is in flames. I’m not sure if I can attribute this memory to the movie though. I had already seen this bit 247 times on television back when the trailer continuously interrupted everything from Lost to Bobby Flay’s Throw Down. (I kept count and can prove this number if you give me a few minutes to falsify my data.)

Ferrell doesn’t seem to have it in his genes for improvisation. Situation after situation gets set up, but never makes that jump from this dimension to the one where comedy re-defines the laws of nature. When he runs about in his underwear or rides a child’s bicycle, he doesn’t take it anywhere. He just keeps doing it and keeps doing it with the fierce belief that duration breeds funniness. It’s as if Charlie Chaplin’s gold prospector had waddled up to the table and started eating and eating and eating and had never been struck with the idea to make his bread rolls dance.

Farrell doesn’t seem to have any more feel for verbal improvisation. In a dinner table scene, he prays to baby Jesus and defends his preference of a child in diapers against his family’s protests that the real Jesus is a man with a beard. His protests merely lead once again to him assuming something of a seated fetal position just short of sucking his thumb and repeating over and over that his Jesus is the baby Jesus. It made me wish the scene had been handed to the young actors playing his sons. We get a snippet of their verbal invention here and elsewhere and we get far more in the DVD bonus materials.

The best evidence of Ferrell’s barely dripping faucet of comedic inspiration is the obligatory (though maybe not for Ferrell) bloopers reel during the end credits. None were funny. None made me glad to stick around and learn that the steadicam was operated by Joe Chess. None displayed the sense of easy, effortless nuttiness that flows so naturally out of Jim Carrey. One can never blame Talladega Nights’ failings on a film editor who lacked a sense of humor. He seems to have determinately kept everything in the movie that was even remotely funny.

On the memorable side is Gary Cole’s rendition of Ricky Bobby’s father. We never really get to know the guy, but Cole brings so much nuance and body language to the role that we effortlessly fill in the blanks. All his fast but pathetic living and his life-long passion for the fine art of refusing to grow up can be spotted in his odd flair for clothing, in his unkempt hair, and in his air of boyish recklessness. He is like an archetypical wayward father miraculously filled with little surprises.

Also memorable is Sacha Baron Cohen’s Jean Girard. His is a towering, slicked back, reptilian presence. I’m not entirely sure where he thought he was going with his take on the sports movie villain. He never really became someone worth hating. He just felt like a writer had grabbed the first idea that raced past him while searching for an opposite to Ricky Bobby’s unsophisticated white trash. Why of course! Make him an elitist French culture snob. All the same, Cohen played it for everything it was worth and seeing Jean Girard in the heat of a race quietly perusing a copy of Camus’ The Stranger gave me a smile and a chuckle. Now there was something I didn’t expect to see. It’s a bad sign though when an underdeveloped character and a misconceived character overshadow the hero of the story.

Maybe I’m assigning too much blame to Will Ferrell. I do find his Elf endearing and Ferrell’s testing the Jack-in-the-Boxes for defects in that movie is a bit of true comic genius, perfectly timed, perfectly funny. Maybe instead of all this meandering improvisation a sports movie needs a more predictable arc and the discipline to touch all the key bases that make us care. By the time Talladega Nights arrives at its big confrontation, it feels like a complete after thought. I didn’t care who crossed that finish line first. Imagine The Karate Kid ending with just two boys fighting instead of a kid we have grown to love coming of age by defeating pure evil. That’s what Talladega Nights gives us, just two guys working their way perfunctorily toward a checkered flag.
Posted by Todd Ford at 5:31 PM