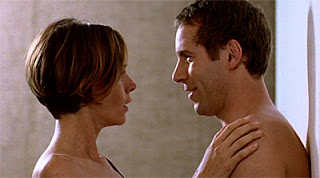 “I want to know what makes you tick.” In the movie Junebug, Ashley (played beautifully by Amy Adams) speaks these words to her sister-in-law Madeleine. Finding out what makes one tick though is everywhere in the movie. And what the various characters – and us in the audience – learn and don’t learn is both the movie’s fascination and, I suppose, frustration.

You could say that a large part of the fun of watching movies is figuring out the characters. This fun is made all the more enjoyable if the movie clues the viewer in to its characters gradually and in subtle little ways spread throughout the movie. Junebug does this. But it takes it another step. The movie is about characters learning about each other bit by bit – and occasionally missing a little bit that only we in the audience get to glimpse.

The main characters, George and his new wife Madeleine, are two of the most enigmatic main characters I’ve seen in an American movie lately. (Anyone familiar with Hitchcock’s Vertigo is used to an enigmatic woman named Madeleine who inhabits art museums. Junebug’s version actually runs an art gallery.) Their entire relationship in the movie is defined by not knowing what makes each other tick. They are one of those meet cute, woo quickly, and get married within a week couples that haven’t yet really gotten past a strong physical attraction and great sex. In a terrific scene, almost at the movie’s center, Madeleine watches George sing a hymn at a church gathering – very clearly she never knew prior that he could even carry a tune. At the end of the movie, George figures “someday Madeleine will know all of my secrets.”

The plot revolves around George and Madeleine traveling to the country for two purposes. She is attempting to charm an artist into allowing her gallery to handle his work. (This subplot parallels other developments in the movie. Attracted initially by the artwork, Madeleine must face moral dilemmas while getting to know the artist.) Coincidently, George’s family lives nearby giving them a first chance to meet his new wife. And they are a quirky little family – although I am happy to say quirky in an unforced and natural sort of way unlike the usual annoying sort of quirky found in movies like Little Miss Sunshine.

George and Madeleine may be the main characters, but Ashley (George’s sister-in-law) is its heart. She makes a striking cinematic entrance. First, in an early scene, she isn’t there and characters are wondering where she is. Then suddenly, in a cut to close up, she’s there. From that point, she is a constantly and endearingly chattering little Miss Marple of a character constantly asking questions, probing, and, yes, trying to figure out what makes everyone around her tick. She acts as the catalyst that brings about the various character-revealing reactions as George and Madeleine are mixed together in situations very new to their relationship.

Ashley is not without her own “getting to know someone” problems though. She is pregnant and married to George’s brother Johnny and it is a bumpy and confusing union. He has feelings of being trapped. She has the belief that given time – and the birth of their child – he will come around. The saddest and hopefully the most hopeful moment for them is when, during Ashley’s baby shower, Johnny attempts to tape a television show that he knows she’ll love and the VCR keeps spitting the tape back out. It is the one moment where we glimpse how much he cares for her, where we glimpse something endearing within him. Unfortunately, underlining the very elusiveness of this game called “getting to know how others tick,” by the time Ashley reaches the basement all she sees is Johnny’s frustrated tantrum.

I find Junebug enormously enjoyable and satisfying. And it did deservedly receive some recognition. Amy Adams earned an Academy Award nomination for best supporting actress. (I think she clearly should have won the award. Her “big scene” is one of very few in my life that managed to bring tears to my eyes. It is a marvel of modulation through a wide range of emotions.) So, why didn’t she win? Why didn’t this little gem of a movie get more recognition? I think it all loops back to the enigmatic quality of its main characters. It is a case of a naturally quirky little movie like Junebug failing to woo Academy members because we don’t know how to feel about its characters in the end. It is a case of an annoyingly quirky little movie like Little Miss Sunshine successfully wooing the Academy because we are left with no choice how to feel about its characters.

Having a movie leave audiences hoping to one day know all of its characters’ little secrets is the much more enticing approach. I don’t know about you, but that’s how I feel about everyone I think I know.
Posted by Todd Ford at 10:34 AM