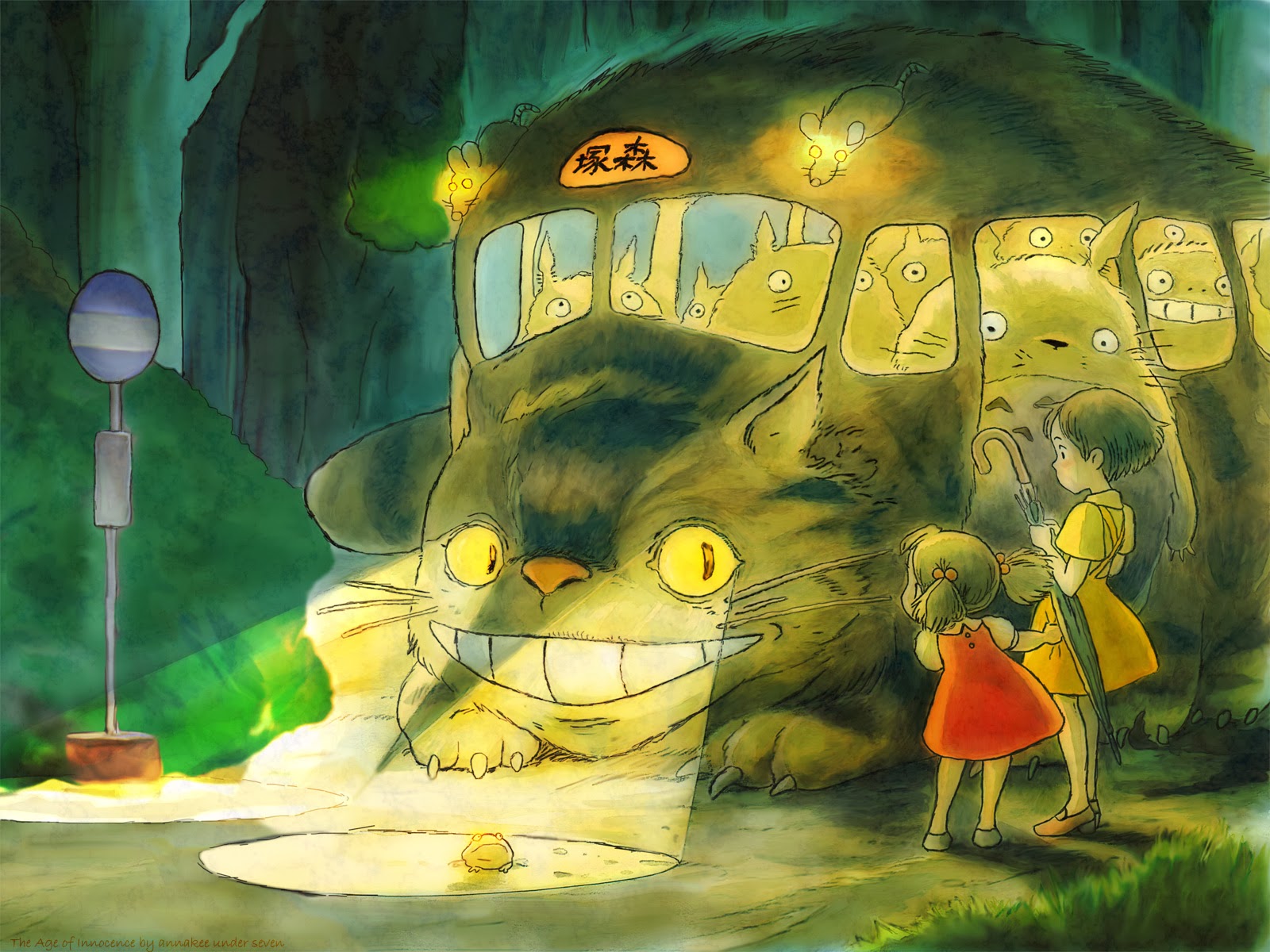 In 1958 Japan, university professor Tatsuo Kusakabe and his two daughters, Satsuki and Mei, move into an old house to be closer to the hospital where their mother Yasuko is recovering from a long-term illness. Satsuki and Mei find that the house is inhabited by tiny animated dust creatures called susuwatari—small, dark, dust-like house spirits seen when moving from light to dark places.[note 1] When the girls become comfortable in their new house and laugh with their father, the soot spirits leave the house to drift away on the wind. It is implied that they are going to find another empty house—their natural habitat.

One day, Mei sees two white, rabbit-like ears in the grass and follows the ears under the house. She discovers two small magical creatures who lead her through a briar patch and into the hollow of a large camphor tree. She meets and befriends a larger version of the same kind of spirit, which identifies itself by a series of roars that she interprets as "Totoro".[3][note 2] She falls asleep atop the large totoro, but when Satsuki finds her, she is on the ground in a dense briar clearing. Despite her many attempts, Mei is unable to show her family Totoro's tree. Her father comforts her by telling her that this is the "keeper of the forest," and that Totoro will reveal himself when he wants to... 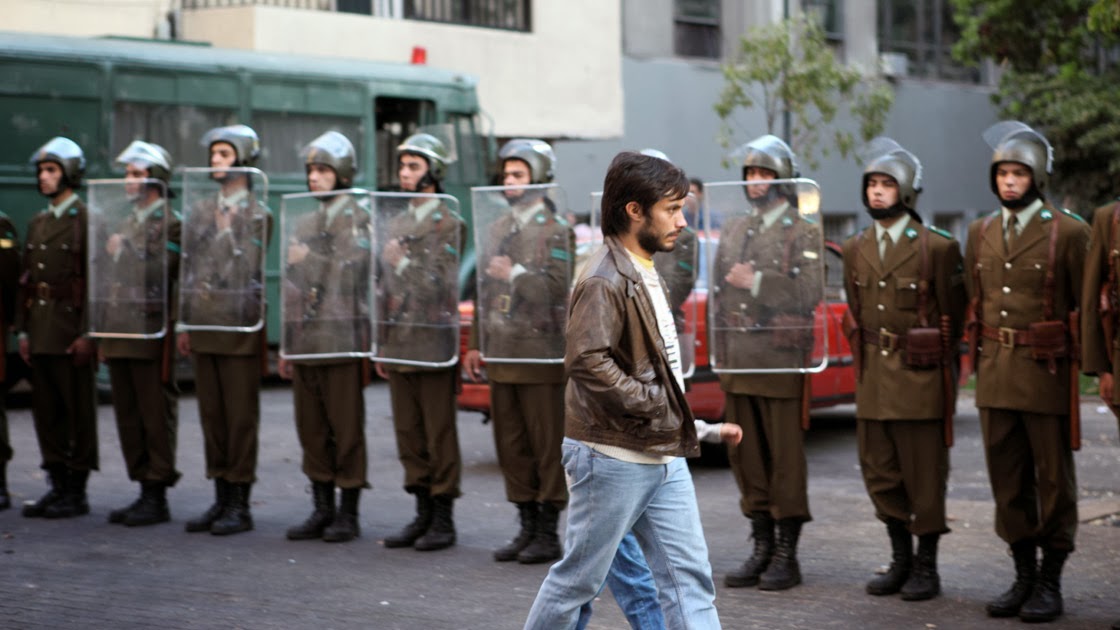 No is a 2012 Chilean drama film directed by Pablo Larraín. The film is based on the unpublished play El Plebiscito, written by Antonio Skármeta. Mexican actor Gael García Bernal plays René, an in-demand advertising man working in Chile in the late 1980s. The historical moment the film captures is when advertising tactics came to be widely used in political campaigns. The campaign in question was the historic 1988 plebiscite of the Chilean citizenry over whether general Augusto Pinochet should have another 8-year term as President.

At the 85th Academy Awards the film was nominated for the Best Foreign Language Film Oscar.

Read a review.
Posted by Todd Ford at 8:51 PM No comments:

Frances Halladay (Greta Gerwig) is a 27-year-old dancer who lives with her best friend Sophie (Mickey Sumner) in Brooklyn, but Sophie decides to move out and move in with her boyfriend, leaving Frances to figure out how to live her life.[5] From there the film follows Frances to Chinatown (where she shares an apartment with Lev and Benji for a brief period), the suburbs of Sacramento ( where she is originally from to see her family for Christmas, and reconnect with old high school friends.), Paris (for an uneventful two-day getaway), Poughkeepsie (to work at Vassar (her old college) as a waitress and RA for the summer), and finally back to New York (Washington Heights). Along the way Frances laments her lack of money, her poor prospects as a professional dancer and an increasingly strained relationship with Sophie.

A review
Posted by Todd Ford at 8:06 PM No comments: 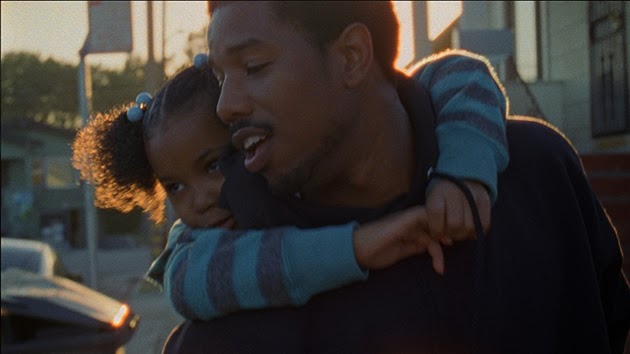 Winner of both the Grand Jury Prize for dramatic feature and the Audience Award for U.S. dramatic film at the 2013 Sundance Film Festival, director Ryan Coogler's FRUITVALE STATION follows the true story of Oscar Grant (Michael B. Jordan), a 22-year-old Bay Area resident who wakes up on the morning of December 31, 2008 and feels something in the air. Not sure what it is, he takes it as a sign to get a head start on his resolutions: being better son to his mother (Octavia Spencer), whose birthday falls on New Year's Eve, being a better partner to his girlfriend Sophina (Melonie Diaz), who he hasn't been completely honest with as of late, and being a better father to Tatiana (Ariana Neal), their beautiful four year-old daughter. Crossing paths with friends, family and strangers, Oscar starts out well, as the day goes on, he realizes that changes are not going to come easily. His resolve takes a tragic turn, however, when BART officers shoot him in cold blood at the Fruitvale subway stop on New Year's Day. Oscar's life and tragic death would shake the Bay Area - and the entire nation - to its very core.