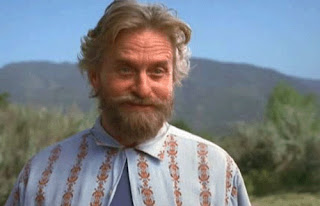 I once had a dentist with a huge map of Santa Barbara, California on the wall. Not from the present day, but from the days of Spanish missionaries. The only evidence now of life in those days is the town’s gorgeous mission with its twin bell towers. I spent many visits under the drill day-dreaming about what used to exist in Santa Barbara where my house, my school, and the grocery store then stood.

This memory came back to me while watching King of California starring Michael Douglas as Charlie and Evan Rachel Wood as his daughter Miranda. Charlie is fresh out of a mental institution and returns home to regain his place in Miranda’s life. In his absence, she has dropped out of school and is supporting herself by working at McDonalds. She prizes her independence and sees his return as an annoyance.

And that feeling is understandable. Douglas’ Charlie is a humorously nutty man with long scraggly beard, no visible means of support, and still tenuous grasp of reality. His failure to make payments on a third mortgage – she didn’t even know he had a second – even costs her the Volvo she earned by dealing with thousands of thankless customers. She wakes up one morning to find Charlie has hawked it to finance his latest venture.

And it is that venture that caused memories to flood back to me about that fascinating map on my dentist’s wall. Charlie is obsessed with the notion that a long lost treasure, once belonging to a Spanish explorer, is buried somewhere in their suburban California neighborhood. The money from her car was necessary to purchase such essential treasure hunting items as a top-of-the-line metal detector and a stack of treasure hunting books.

Out of love for him, Miranda goes along with his quest. Together, they wander about strip malls and get ejected from private golf courses that are snooty as only California golf courses can be – trust me, I worked at one. And it is during these wacky stops along their search and the accompanying puzzled stares from onlookers – stares that bother Miranda but leave Charlie undaunted – that King of California best secures its goofy comic footing.

Things turn serious when Charlie feels he has finally, fully deciphered his treasure map and realizes that his ancient Spanish fortune lies six – or maybe seven – feet beneath the floor of Costco. They must turn their, until then, relatively harmless adventure into breaking and entering and destruction of a concrete floor, first dragging several pallets of merchandise out of the way, of course.

How it unfolds from there takes twists and turns that are sometimes expected, such as a real re-connection between father and daughter, and other times surreally unexpected, involving much daring-do, Miranda being bound with rope, and some SCUBA gear.

The movie has a wonderful sense of two time periods overlapping. It even has a nice animated sequence where one of Charlie’s aging Spanish maps comes to life and he enters it like a time-traveling cartoon explorer. It’s a perfect way of depicting his frame of mind.

Of course, all of this is really just a light-hearted and entertaining way of looking at a subject that’s not so light, a subject we’ll all have to deal with, perhaps with the help of our own daughters. As we age, it’s the recent memories that are first to go, essentially leaving us walking about in the present while living in the past.
Posted by Todd Ford at 2:52 PM