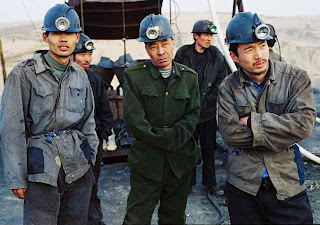 I’m often asked to recommend foreign films that aren’t so, well, foreign. These people have bravely dipped their toes into the cinematic waters of France or Germany or Japan and have found them a bit too cold. Plus, they’ve been faced with just too darn much subtitle reading to justify the work of figuring things out. I can name a few foreign films that will have me scratching my head to my grave. Then again, I’ll never figure out something like Transformers from the United States either.

I have a great track record for setting people down a more enjoyable path with selections like Italy’s The Bicycle Thieves and Iran’s Children of Heaven, both deeply moving films especially in these recessionary times. I can now whole-heartedly recommend China’s Blind Shaft which is also deeply relevant today.

The story centers on two men who have hit upon a perfectly lucrative occupation in times of great economic hardship. They meet some sad-sack in the streets, convince him to pretend to be a relative, and get employed together in a coal mine. Then, when opportunity strikes, they kill the sad-sack, make it look like an accident, and extort money from the mine owners to keep it quiet.

The film opens in the middle of things. We are watching some characters that we know about as well as the hundreds of people we pass in a mall during our travels to a distant city. They are starting a day’s work in a mine and head down the shaft together, into the dark. The camera settles on three men as they spend time digging and scraping away at the rock and joking about the quality of one man’s love life back home, just another day at the office. Then, with merciless speed and precision, two of the men kill the third, drag his body deeper into the darkness, and fake a mine shaft collapse.

The suddenness of the event leaves us momentarily in shock. It feels like the rug has been pulled out before we even had a chance to stand upon it. The rest of the film fills in the blanks. Who are these two men and why has the film privileged such a vicious act as our introduction to their behavior?

After the murder, we observe them as they con the management, flush their dead “relative’s” ashes down the toilet, fill their bellies with stew, and wander about streets strewn with the unemployed, eventually passing some time with a couple prostitutes. They seem sadly, pathetically aimless. They are trapped in a never-ending cycle of entrepreneurial ingenuity gone sour and distractedly pass the time between scores like junkies lounging about between fixes.

All of the other faces in the streets seem just as sad, just as desperate. They’re like Oklahoma migrants begging for work – any work at all – in The Grapes of Wrath and turning the other cheek repeatedly as one employer after another takes advantage of them. And out of this sea of the desolate emerges a naïve young man, the innocent player in the next round of the mine shaft con game.

The bulk of the film follows our two entrepreneurs as they draw this young man into their plot and set the stage for a repeat of the film’s opening scene. Only this time, after who knows how many times their plan has gone right, things instead go left and one of the men finally sees light at the end of what has always been a blind shaft, at least for a moment.
Posted by Todd Ford at 2:44 PM