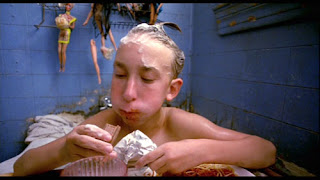 I recently took a fresh look at Gummo and, while I once found it both intriguing and a mixed bag of scenes (some terrific, some that missed the mark although I wasn't sure what mark they missed, and some just too disturbing to watch), I now find it a most remarkable piece of work.

This film hasn't gotten a very good shake with critics or with film buffs in general. It seems that its lack of narrative and almost freakshow aesthetic has gotten the best of people. These things are not as problematic as some have concluded though and they have certainly obscured the film's real triumphs.

Anyone even half awake during the first minute should immediately understand that Korine isn't interested in conventional narrative. He uses the metaphor of a tornado with its random nature -- sometimes devastating, sometimes merciful; sometimes brutal, sometimes beautiful -- as a preface to the sort of film he intends to present. And that's what he gives us. A scattered collection of scenes that methodically create juxtapositions between devastation and mercy, brutality and beauty all at the service of drawing a collage-like portrait of a particular time and place -- an entirely valid approach to film construction that is justified all the more by its creating a portrait that feels very much alive.

I suppose people have a point in feeling that Korine's obsessive use of unusual characters -- society's cast-asides like albinos and midgets and the mentally handicapped -- crosses the line into exploitation. I think it overlooks a few things though. One, they aren't used in an exploitative way which would involve passing judgment and setting them up as jokes at their expense. I just don't see that. They are characters that happen to be part of this time and place and that Korine finds to be interesting. And Korine goes out of his way to not judge them and to emphasize their total level of acceptance within the world he has created. Two, and maybe more importantly, putting the film down on these grounds overlooks what is a crucial element of Korine's project: He is making reference to his favorite film, Even Dwarfs Started Small, to make a similar political statement. That film by Werner Herzog shows us a world entirely populated by dwarfs who carry out a revolution that results in a state of anarchy. Gummo possesses essentially the same elements.

For me, the film achieves three significant triumphs. First, it is filled with very striking images, unshakable and unforgettable images that feel fresh and surprising in a way that movie images seldom do. I watched it last night back-to-back with Brakhage's Dog Star Man and found them to be strangely appropriate companions. Korine's film is filled with little montages that strike me with the same otherworldly sense of the barely familiar as those of Brakhage. Also contributing heavily to Gummo's oddly fascinating imagery is his casting. I have never seen a film so filled to the brim with such distinctive and one-of-a-kind faces, faces that really hold the screen, faces that seem to oscillate between grotesque and lovely in step with the beating of the characters' hearts. Adding to the fascination is the film's constant strategy of juxtaposing scenes of carefully staged art house stylization with scenes of blunt, documentary-like presentation. Everything in this film is a matter of juxtaposition.

The second triumph is the film's surprising warmth -- so surprising that most seem to have missed it entirely. Think back through the film's scenes and try to recall any scene where the characters display anything but love and affection for each other. (There are a few which I'll get to in a moment.) Teenage girls frolic on a bed after using tape to make their nipples perkier. Some white-trash folk understand a buddy's frustration over losing an arm-wrestling contest (although it is obvious his frustrations run much deeper) and help him cope by encouraging him to beat up a kitchen chair -- one of the film's most inspired scenes. And in a scene that could have been very, very ugly with a young boy entering a bedroom to be serviced by a mentally handicapped prostitute, we instead get one of the warmest and most affectionate moments I've ever seen in a film.

The third triumph is its well-realized political statement. Werner Herzog describes the film as a work of science fiction and it reminds me very much of works in the post-apocalyptic genre. It is as if the tornado is really a metaphor for some other form of holocaust such as the nuclear devastation that set the stage for Mad Max. And like the new worlds depicted in Mad Max or Dawn of the Dead, Gummo presents us with an insular and microcosmic society in a state of anarchy still dealing sporadically with the remains of the patriarchal, capitalist society that has brought upon itself its own destruction.
Think about the scenes of discord in Gummo. The scenes I alluded to where characters show other than affection for each other and where ugliness replaces beauty. All involve money and/or one person's exploitation of another. We have the restaurant owner trying to make a buck by hiring kids to kill neighborhood cats. This not only generates the film's most pervasively ugly motif, it also creates an element of competition and conflict between two different groups of cat-killers. We have the man who pimps out his wife to make ends meet. We have the man from out of town -- a businessman with an occupation that is humorously and pointedly worthless for anything other than moving money around -- who assumes a position of superiority over three girls and starts to molest them. And, also pertinent to this topic of collapse of a past patriarchal society is the scene where a mother holds a gun to her son's head trying to force him to smile as they both mourn the death of "the father."

My favorite lesson of all is the candy bar lesson. A boy takes a bath -- in the filthiest, most disgusting bath water imaginable -- and is given a tray of spaghetti to eat while bathing. A knock comes at the door and it is a pair of well-dressed boys selling candy. The mother buys a bar almost out of instinct -- like characters buying worthless little red and blue blocks in THX 1138 -- and adds it to her son's dinner tray, after first falling into the dirty water. The two young salesman go away gleefully counting their "green backs." The boy takes one bite from the candy and sets it aside clearly finding it terrible tasting and worthless. The two young salesmen were a vision of where the girl molesting adult businessman selling worthless products for a quick buck got his start.

The film shows -- knowingly -- that this anarchic new world still has problems to work out before beginning to approach that all-elusive utopia such as homophobia, racism, and lack of gender equality, but I think the earlier mentioned kitchen scene provides a nice and succinct statement about how far this new world has already progressed. It is a compact lesson on the need to replace competition with cooperation. The scene opens with a series of arm-wrestling contests that leave the winners and losers increasingly separated by their degrees of celebration and disappointment until it gets out of hand and turns violent. The moment is saved by one helping the other take out his frustration by helping him beat up a kitchen chair.
Posted by Todd Ford at 10:47 AM

Alright, I dig most of what you're saying, as I am a fan of Gummo. But, couple things: Solomon did not take one bite of the candy bar and put it aside. There is a whole scene dedicated to him oozing it into his mouth (as it is now half-melted from the bathwater) and maybe not enjoying it, but still eating it, nonetheless. (symbolism much) Other thing, the bathwater is not filthy water. It is water filled with rust, a common ailment for people who live in the country.

This is great! Way to go.