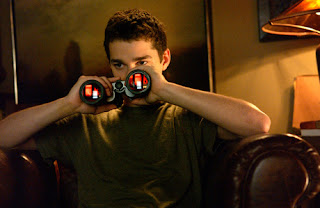 There are some fascinating flavors in the thriller Disturbia. It’s a film where the cook pulled some promising ingredients out of the cupboard. Too bad it all boiled down to such a terrible tasting concoction by the time it reached the table.

Transparently inspired by Hitchcock’s Rear Window, Disturbia tells the tale of Kale (Shia LaBeouf), a teenage boy confined to his house and spending his copious free time spying on his neighbors through binoculars. The Grace Kelly to his James Stewart is Ashley (Sarah Roemer) and providing comic relief in place of Thelma Ritter is Ronnie (Aaron Yoo). My utmost apologies must be extended though to the late great stars of Hitchcock’s film. The only comparison that Disturbia’s stars earn is one of pure and simple character mapping.

The first mistake made by Disturbia is working far too hard to place Kale is this context. Rear Window opens with Stewart confined to his apartment, leg in a cast. And we learn all we need to know about how he got this way from a simple tracking shot across a few photographs during the brief opening credits. Let the suspenseful spying on his neighbors begin.

In Disturbia, we are dragged through a never ending process of fly fishing and car accidents and high school classroom incidents and courtrooms and high-tech gadgetry finally leaving our protagonist in a state of house arrest. And then we still have to sit through video games and iPods and scenes of Kale running to the bathroom after learning that a steady diet of peanut butter, chocolate syrup, and soda pop doesn’t qualify as healthy. Finally, his mother has the sense (showing some pity on us poor viewers) to cut the power cord to his television leaving Kale with nothing to do but to finally pick up his binoculars.

Mistake number two made by Disturbia is in its presentation of that voyeurism. Rear Window is memorable for placing a complete gallery of interesting characters in those almost always open windows across the courtyard. The dancer, the songwriter, Miss Lonely Heart, the couple with a dog, and the unhappily married couple (the subject of Stewart’s murder suspicions) all have stories to tell that play as variations on the relationship between Stewart and Grace Kelly.

Disturbia gives us only two: Ashley starts out as a subject of Kale’s teen-lusty gaze walking about the yard looking like a model, semi-undressing in well-lit rooms (window blinds open), and sunbathing on the roof before catching him in the act, knocking on his door, and becoming his voyeuristic accomplice. (This sort of merging of the dancer and Grace Kelly is one of Disturbia’s twists on the original. Unfortunately, nothing really interesting comes out of it.) And then there is the suspected killer. Just as Raymond Burr looked delightfully guilty from the get go in Rear Window, David Morse creeps us out from first glimpse. But, while Morse’s portrait of evil is one of the few sources of fun in Disturbia (at its most effective when he catches Ashley alone in her car), Morse is allowed to go too far over the top. Hitchcock knew how to keep Burr on low heat. In Disturbia, director D.J Caruso allows Morse to boil over and spill into a place that should have been left to Freddy and Jason.

Both films share the thesis that cinema is a form of voyeurism and focus on the viewer’s/voyeur’s helplessness. Both can watch, but they have no control over what they see. When Grace Kelly enters Burr’s apartment and gets caught, we are made to feel Stewart’s complete desperation, his total powerlessness. In Disturbia, it is Ronnie who is sent to investigate by breaking into the suspect’s car and slipping into his garage. Much of the original’s sense of helplessness is dissipated though. There is something about all the cell phones and video cameras used to track Morse’s whereabouts and Ronnie’s progress that minimizes the suspense. When Burr went shopping, Stewart (and the audience) had no idea when he might return. When Kelly moved out of Stewart’s eye sight in the apartment, anything could be happening to her. We and Stewart are left to our imaginations which of course start working overtime. (There is a use of a cell phone during a car crash early in Disturbia that is quite tantalizing in its relationship to the theme of helplessness and that relates it to films like Blow Out and The Conversation. I’m not sure if it is intentionally tantalizing or accidentally tantalizing though, probably the latter.)

Rear Window takes as its central theme an age-old unease in males, the desire to be free and to wander and how a woman and marriage threatens to thwart that desire. It then builds everything around this theme very effectively.

Disturbia’s greatest – perhaps sole – interest is how it takes a teenager’s love/hate relationship with his parents as its theme and similarly builds everything around it. While the film labors a might bit too strenuously to set them up, Kale’s love for his parents is nicely captured by two images of him strewn upon the ground looking in horror first at his father and then for his mother. Kale’s house arrest of course stands in for a teenager’s hatred of being grounded and of having to live within often arbitrary and “unfair” sets of rules and curfews set by his parents. Kale’s demarking the perimeter of his limitations in the yard – how far he can stray before his ankle bracelet alerts the authorities – and the film’s comparing this to a shock collared dog makes a decent visual correlation to this teenage fear. And of course his desires, Ashley and some nasty neighborhood kids he wishes to stomp are often just out of reach.

Disturbia’s final misstep is one that leads me to have little hope for Shia LaBeouf and my ever getting along, cinematically speaking. When we first met, he was having a thoroughly unconvincing relationship with a hottie in Transformers. Now we meet again and the exact same thing is happening. LaBeouf and Roemer share the screen with all the convincing passion of a cover of Teen Beat glued to a cover of Seventeen. Their climactic kiss is as sexy as Tom Cruise’s near-lip lock with a corpse in Eyes Wide Shut. What we have here is – to paraphrase and mangle a line from Disturbia – a kiss between two dead hotties. Or back to my cooking metaphor, its taste is pretty rancid.

I’ll take that slow-mo kiss between James Stewart and Grace Kelly any day.
Posted by Todd Ford at 11:59 AM