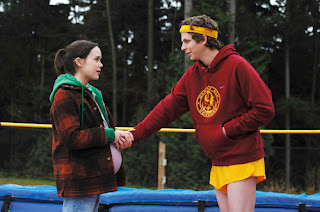 There are times when the critic in me finds himself totally disarmed. Some movies accumulate such a mountain of little pleasures that they dare me to burrow in and look for flaws or to even attempt analysis. I’ll find myself sitting in the theater with a smile from start to finish and overwhelmed by the feeling that (almost) everything is perfect. Juno is one of those movies.
Juno opens with a teenage girl (the title character played appealingly by Ellen Page) discovering that she is pregnant – in a drugstore scene alone worth the price of admission. It then follows her through all the decisions and indecisions she must make while dealing with a situation beyond her maturity level.
(This is my one stab at analysis. The theme of the movie is maturity – Juno states this in one of many delicious throwaway lines sprinkled throughout the script. Every major character is drawn as being to some degree mature enough or not mature enough to be dealing with the issues at hand. Juno, the character, of course discovers she is more mature than she thought and the movie makes the point that age and maturity don’t necessarily go hand-in-hand.)
Another scene worth the price of admission is the inevitable “pregnant girl breaking the news to her parents” scene. In Juno though, this scene is filled with mixed feelings. You can watch every character – Juno, her moral support lending best friend, her dad, her stepmom – go through all the phases of “this isn’t happening” and “I’m not ready for this” and “I can deal with this.” By scene’s end, you just know that these people will work it out – and that Juno’s boyfriend should start protecting his private parts.
Like last year’s Knocked Up, Juno goes through “abortion is an option” motions before casually and humorously abandoning the idea. Juno then settles on adoption as a solution and this leads to her getting to know the prospective adoptive parents. While the prospective mother comes across as underdeveloped and inscrutable (a slight flaw), the prospective father is a fascinating character and his relationship with Juno is key. He is an overgrown boy still playing with his toys. At first, Juno connects with him as a peer, but then has a turning point when she sees reflecting back from him a level of maturity she has already left well behind.
Paulie Bleeker, Juno’s boyfriend and the father of her baby, is a beautiful creation brought to life by Micheal Cera. At first, he is a gawky Napoleon Dynamite clone and the butt of many jokes. When confronted with the name of the father, Juno’s dad says, “I didn’t think he had it in him.” But, over time he grows in dimension before our very eyes and ends up a mentor to Juno teaching her lessons about what it means to grow up and what it means to be in love.
Maybe Juno’s complex and open-minded attitude toward maturity did the trick: my wife and I drove home smiling and my teenage daughter and her friends have changed the artwork and music on their MySpace sites to keep their Juno memories alive. Often, movies that deal with teenager/parent relationships are condescending toward one or the other. They are either centered on the teens and the parents are neglectful, self-motivated, or absent; or they are centered on the parents and the teens are trouble with a capital “T” and need to grow up. Juno treats all of its characters with equal respect. They are all just essentially good people struggling to grow up.
Posted by Todd Ford at 10:22 AM