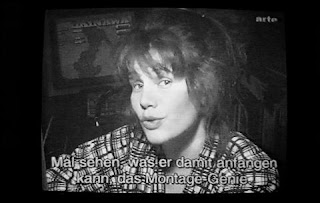 I once wrote an essay for the publication The Open Forum in which I proclaimed that “all films are documentaries.” It was motivated by playwright David Mamet’s declaration “all directors should strive to be documentary filmmakers.” By that he meant that directors work too hard trying to get actors and camera to express things beyond their reach. I’ve often read in a screenplay things like: “Filled with anticipation, [character name here] enters the room. He takes his seat at the head of the table, alert to whatever fate may throw his way next.”

Now, Mamet’s point is that one simply cannot film these things, at least not easily. How does an actor act out anticipation and alertness? What documentary filmmakers do on a daily basis is shoot shots of this and that, a shot of a couple kissing in a park, a shot of birds flying. He then finds a way to stitch them together in the editing to give them meaning. Mamet offers the example of taking a shot of a foot stepping on a twig and cutting it to a shot of a deer suddenly lifting its head to create the idea of alertness. Neither shot carried the meaning of alertness. Neither shot carried much meaning at all. But combined, they create meaning. In fiction films, Mamet argues, actors shouldn’t be required to create any more meaning than that foot stepping on a twig or deer lifting its head. Let the editing do the work.

This notion of letting the editing create meaning is – as Mamet points out – almost as old as the cinema. It all started in Russia with the pioneering silent filmmakers Lev Kuleshov and Sergei Eisenstein. Kuleshov is famous for having conducted an experiment where he filmed neutral, expressionless shots of actor Ivan Mozzhukhin. He then edited them in an alternating fashion with shots of a steaming bowl of soup, a pretty girl, and a coffin. Showing it to an audience, he was pleased and amazed to hear their raves over the actor’s versatility in expressing feelings of hunger, desire, and grief.

Eisenstein expanded this experiment into a complete theory of film editing, his theory of dialectical montage. Up to that point, Hollywood filmmaking had emphasized the easy flow from one shot to the next as the audience is carried through the events of a story. Eisenstein was interested in putting the shots at war with each other, making them crash into each other. And out of these collisions would spring to life new meaning. In his most famous film, The Battleship Potemkin, he (to offer a simple example) cut together three successive shots of lion statues – sleeping, head raised, sitting up – to express the awakening of anger and rebellion.

We get an example of this – a conscious commentary – in Chris Marker’s remarkable documentary essay Sans Soleil. He cuts from a Japanese cartoon shot of a gun being fired to a giraffe stumbling in Africa. Now, it is obvious that the bullet from that gun did not strike that animal and yet the connection enters our imagination all the same. It is no different really from the more devious temporal rearrangements by Michael Moore in Roger & Me to create a make believe timeline to better hang Roger Smith. Or rather, it is no different except that the trickery behind Moore’s creative editing is not obvious.

Have you ever pointed a camera at a friend or family member? I am certain that they immediately stopped behaving naturally. They probably either ran away, hands over face, or began posing like some crazed cover model. In a fictional movie – Raging Bull; Dude, Where’s My Car? – the actors aren’t being themselves (at least we hope not). They are acting.

In Phantom India, Malle makes the point that his documentary subjects are doing the very same. He films them going about their daily activities after giving them one simple instruction: “Don’t look into the camera.” (As an aside, there is an entire sequence in Sans Soleil in which Marker asks: “Frankly, have you ever heard of anything stupider than to say to people as they teach in film schools, not to look at the camera?” In Phantom India, Malle collected so many shots of people staring at the camera that he turned it into a leitmotif.) What Malle got was a lot of people doing what they do as if trying to do it the way a movie star would do it. It’s just a variation on how interview subjects will often wear their best dress and special occasion makeup, or how one madly cleans up the house before guests arrive. They are all performances.

Making the connection between acting and the people in documentaries even more clear is the way documentary subjects are cast. In Hoop Dreams, many more characters were initially filmed than the two young basketball hopefuls we end up following. Two criteria are generally employed while selecting subjects. Does the person fit one of the archetypes required to create a well-rounded story? (Is he a hero, villain, mentor, etc.?) And is he interesting and extroverted? The kids featured in Jesus Camp attained their star status because they are natural performers. Point a camera at them and they immediately turn on like Eveready Bunnies. They wouldn’t be very useful if they covered their faces and fled.

“Everything one sees and hears in a documentary is true.” To fully appreciate documentary film, one must begin by realizing the utter falsity – and perversely – the utter truthfulness of that statement.

In his documentary Letter from Siberia, Chris Marker conducted an experiment. Footage of streets, a bus, and workers repairing a road is repeated unchanged three times. Each is accompanied by a different voiceover narration. The first gives an impression of happy workers and modernization. The second mentions slaves and primitive labor. The third gives simply a direct description of what we see. Which is the truth? The similarity to Kuleshov’s experiment is clear. Uninflected images are charged with meaning by being juxtaposed with narration.

Add to that effect the documentary filmmaker’s process of selection and you get a complete picture of the documentary’s complex relationship with truth. When we watch the documentary Gimme Shelter and see the darkness and violence and the hubris displayed by the Rolling Stones and their lawyers, it is easy to get the impression that nothing else happened. But a two stage process has been guided by the Mayles Brothers desire to make a film about darkness and violence and hubris. They directed their cameramen to seek out and point their cameras at certain people and activities. They chose to include in the final edit only shots that contributed to their agenda. While it may have been a challenge – I don’t know, I wasn’t there – a filmmaker with a different agenda could’ve made Altamont look like a happy party full of frolicking hippies. Which is true? Both and neither are true. Both are true because every image and sound used really happened. Pictures and sounds don’t lie, or do they? But neither gives the whole picture, the whole truth.

In Phantom India, Malle gives us a very full and well-rounded portrait of India. It is a travelogue of sorts that takes us to all parts of the country and introduces us to a great many widely varied people. What we end up with though is not the truth about India in 1962, but rather how a French, radical intellectual sees and interprets the India he saw. It is ultimately a gentle call for the not so gentle need for revolution in a country stifled by a caste system combined with Malle’s dismay at the seeming impossibility of such revolutionary change. Religious belief has people perfectly content in their lots in life no matter how high or low. Is Malle’s India the truth?

In the end, I always arrive at the end of a good documentary with my head filled with ideas, ideas about the nature of directing and acting and editing, ideas about the cinema itself. Most fictional movies leave me with thoughts like “that acting sure was good” and “those sets sure were dazzling” and “I wonder what will get nominated for an Oscar.” I think many a documentary should sweep every category at the Academy Awards. After all, what is more impressive than a documentary editor stitching together thousands of unrelated images and sounds to tell a story?
Posted by Todd Ford at 10:13 AM