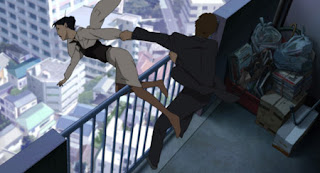 I always have a hard time remembering my dreams. And I often wish that I could hook up a VCR to my head while I sleep and later sit back with some popcorn and watch all of those fleeting images, hitting rewind whenever I feel like it. I have some idea what that would be like now after watching the Japanese animated film Paprika.

Featuring strikingly gorgeous artwork somewhere between, say, Spirited Away and a graphic novel; Paprika is a feast for the eyes. (If I say something stupid at this point, it is because I haven’t spent a lot of time with Japanese animation yet, I don’t have many points of reference or comparison. I just know that Paprika looks like Miyazaki with a harder, more grown up edge.)

The story revolves around a device known as a DC Mini, described as “a scientific invention that allows us to open the door to our dreams.” It is a headset-like device that captures the brainwaves of a sleeping individual and records them for later playback. This playback can be on a computer or can be fed back into the brain of the same or a different individual. Actually, Paprika reminded me of a mixture of Richard Linklater’s two “animated” films Waking Life and A Scanner Darkly.

It shares Waking Life’s sense of the viewer never being quite sure if what is happening is actually happening or simply a dream (or a dream within a dream…). It also shares Waking Life’s penchant for philosophical tidbits such as: “Don’t you think dreams and the Internet are similar? They are both areas where the repressed conscious mind vents.”

Along with A Scanner Darkly, it lives in the realm of paranoid science fiction where a scientific discovery showing much promise is stolen and turned to evil purposes. Essentially, Paprika is A Scanner Darkly with a DC Mini instead of Substance D.

One other paranoid concern raised by Paprika is how replaying a person’s dreams in another person’s mind, especially without their awareness, can have damaging effects. This is actually described as an act of terrorism by one of the characters. A dream is something very personal. It plays with material gathered during waking life and arranges it to try to answer some question or fulfill some wish (if Freud was on the right track anyway). If another person is exposed to this surreal move-like production, it can only lead him astray; it could possibly lead him to destructive or even self-destructive ends. It is like the films of David Lynch, for example Eraserhead. Lynch described it as a reconstruction of one of his own dreams, very meaningful to him but unlikely to hold the same meaning for anyone else. I consider Eraserhead an expression of the fear and dread of parenthood. My wife considers it a sickening experience that fills her with despair. God only knows what it all means to Lynch.

Paprika also becomes confused in the way Lynch’s films are confused. I was often as puzzled by Paprika as I recently was by Inland Empire. I wasn’t sure which end was up. But in both films, the close relationship between movies and dreams is clear. It is a beautiful confusion where impossible things happen that somehow make perfect sense. The flow seems perfectly natural – especially with animation – when a woman descends a ladder through a trapdoor in a closet and ends up first in a room full of a child’s artwork and then in an amusement park. It makes perfect sense when someone leans against a railing beside a merry-go-round and is suddenly tumbling over the balcony railing high up in an apartment building. These juxtapositions make no sense and make perfect sense at the same time, something cinema is good at.

What if your waking state and your dreaming state were blurred together? What would happen if all of the repressed aspects of your psyche decided to hang out with you? Paprika explores this. Doubles are everywhere. Characters are constantly reflected in various surfaces, but what reflects back is not their self but rather a repressed version. A character is seen reflected in multiple mirrors at one point and we see her reflection making a series of faces ranging from annoyance to amusement to disgust as two young men make a pass at her. On a moving sidewalk we she her reflection take on the likeness of a dark-haired other woman. Characters are seen as shadows and anima figures and alternate personas of each other.

Of course, none of this is new to movies. Take any movie and the villain is most likely the shadow of the hero, the love interest the hero’s anima, the femme fatale his negative anima, and so on. What is fun about Paprika though is how psychologically out in the open it is. Actual dream interpretation terminology is used throughout to make explicit how dreams interplay archetypes on a personal unconscious level while movies are the same only on a collective unconscious level. Movies are dreams shared by an audience.

Paprika evokes this relationship between dreams and movies quite openly and quite often. At one point, Paprika compares early REM sleep dreams to artsy short films and late REM sleep dreams to Hollywood blockbusters. There are many instances where transitions between a dream reality and a real reality (or is it another dream reality?) transpire through various cinematic tools. A dream is suddenly happening on a movie theater screen while another character watches. Characters pass through the lens of a video camera from one reality to another. Characters get absorbed by the video playing on a website. There is even a discussion about how a particular dream crosses the 180 degree axis line used by filmmakers to maintain a clear spatial relationship between characters on screen, a rule that Paprika often violates in pursuit of its beautiful confusion.

Paprika features a major character that functions as a surrogate for director Satoshi Kon. He has a recurring dream that relates to an unfinished 8 mm movie from his childhood, a movie and a dream that leaves on asking, “Where’s the rest?” Satoshi Kon seems to see his filmmaking as dream work, as a way to come to terms with his childhood. Paprika ends provocatively with a suggestion that Satoshi Kon has completed some unfinished childhood business, has reached some new maturity. In the final scene, his alter ego is told to go see the movie Dreaming Kids. As he walks up to the ticket window, he glances at posters for such past Satoshi Kon works as Tokyo Godfathers and Perfect Blue. Then he says, “One adult, please.”
Posted by Todd Ford at 12:12 PM