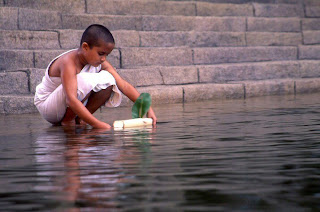 Isn’t it strange how bits of insight and inspiration come at you when you least expect them? This morning, I took part in an annual deacons/elders meeting at my church. The issue of dealing with change was placed at table center and the need to establish a “bottom line” of non-negotiable issues was discussed. A few hours later, while re-watching Deepa Mehta’s beautiful and haunting film “Water,” my morning’s lessons seeped into the experience, finding new significance.

Set in India in 1938, “Water” opens with a beguiling scene of a young girl, Chuyia, mysteriously traveling with her family and a very sickly looking man. What’s going on? Who is this girl? Who is this man? Is he her father or her uncle? In the next scene, we learn that the man was actually the 7-year-old’s husband and that she has now joined India’s multitude of widows.

In short order, her head is shaved and she is – in spite of lively protestations – locked into an ashram where widows are forced to live out their lives honoring their deceased husbands. “Water” opens with a title card reading: “A virtuous wife who remains chaste when her husband has died goes to heaven. A woman who is unfaithful … is reborn in the womb of a jackal.” What follows is a tale of the conflicts this tradition provokes for our young heroine and another somewhat older widow, Kalyani, who befriends her.

Chuyia functions in “Water” as our eyes through which we observe the forbidden relationship that develops between Kalyani and a young man, and follower of Mahatma Gandhi, named Narayan. And this approach, with Chuyia being so young, questioning, and disbelieving, works exceedingly well for a Western audience. It’s very alien, even maddening, watching these women suffer simply because they’ve outlived their husbands. It seems strange indeed for this to happen to a girl as young as Chuyia (and we learn she isn’t the only child widow to have found her way into this “prison”).

Similar to the way Chuyia stands in for our modern eyes, Narayan embodies our modern sensibilities. One of his first actions upon arriving home from college is replacing a photo (that looks like a picture of his high school class) on the wall of his parent’s home with a photo of Gandhi – new learning replacing the old. “Passive resistance” is poised ever-ready to leap from his tongue as from a tiny springboard. And when he tells his mother he plans to marry Kalyani, a widow, she scolds him saying his study of Gandhi’s teachings has driven him crazy. He finds this treatment of widows as unacceptable as we do.

At first, I found “Water” a truly foreign viewing experience. I enjoyed it and was taken by the beauty of its images, its conflicts between traditional and new ways of thinking, and the many playful uses of the title liquid. (One thing is for sure, you will have no difficulty discovering why the film is titled “Water.”) But the tragic climax bothered me until I connected my lesson from this morning to this line of dialog: “What if our conscience conflicts with our faith?” Suddenly, the whole film crystallized. To risk repeating a cliché, traditions die hard and change only comes with great struggle. The tragedy of the film’s climax is the result of Kalyani’s encounter with her “bottom line.”

My summation is a cliché, but the film’s realization and especially its shattering and unforgettable ending is pure and original poetry. The final shot of one of the ashram widows is framed with a train disappearing into the background carrying with it all the hopes of future change for India’s widows. The cinematic poetry derives from extremely shallow depth of field. The woman remains in the foreground in sharp focus, face pensive, while the train becomes an indistinguishably distant blur. This is then underlined – unnecessarily I think – by a closing title card: “There are over 34 million widows in India according to the 2001 Census. Many continue to live in conditions of social, economic and cultural deprivation…”

Thank you Reverend Deanna. Your words were heard, though maybe not yet put to use quite as you expected.
Posted by Todd Ford at 3:26 PM